July 26th – The Municipality of Cantley informs the population that all the traffic routes are now usable. Public works department is now on the ground to repair the damages and clean arteries. The repair works will last until the end of next week.

Yesterday morning, Public Works Service removed some culverts to increase the water flow and avoid dangerous situations. All the paths which were affected were handled yesterday so that the citizens can enter and go out of their residence. Today, the service polishes up the finishes of these 5 residences.

The municipality would like to thank all the people and residents who took the time to inform about problems and current damages. It was verly appreciated and helpful!

We thank you for your understanding and for your collaboration. For any further information, thank you for contacting Simon Carpentier-Mathé, senior Clerk of the Public works service : 819 827 3434, extension 6814.

July 25th – The Municipality of Cantley is on Alert mode due to the meteorologic conditions. The Public work department is on the field. Sand bags are available at the Édifice Antoine-Sabourin, 14 rue Sizerin or it can be delivered to you on request :  819 827 3434 poste 6814.

Here are the sectors touched by the heavy rainfall  (6 pm):

The public Work department took off culverts this morning in some houses on rues Commandeurs, Crémazie, Denis, Érables, Taché in order to increase the water flow. The Cantley Municipality will reinstall new culverts at the latest on the 26th of July. 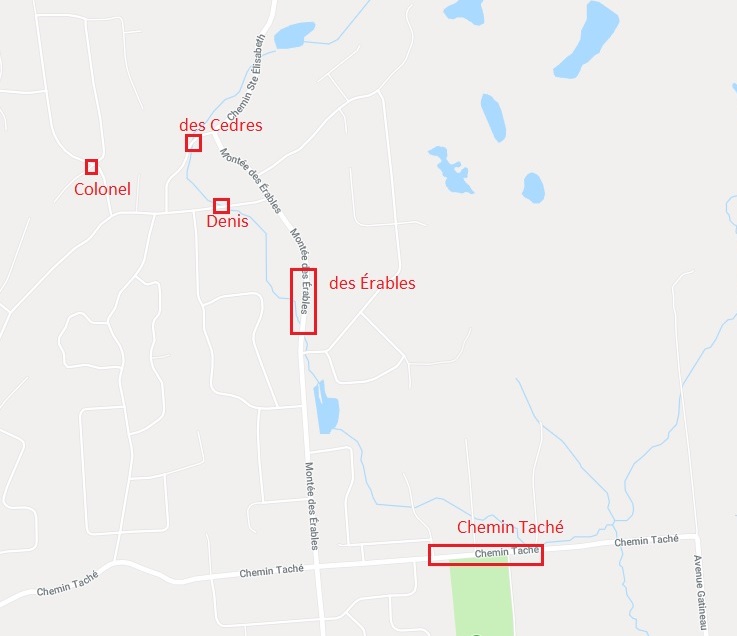